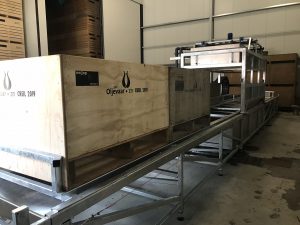 ‘When something works well, a short but sweet story is enough’, smiles Koos Oijevaar. The bulb shower, which was delivered by AgrinServ to Gebr. Oijevaar & Zn in Creil, functions to their full satisfaction. ‘We get the work done much faster now and the capacity of this shower is much better than the previous one.’

The flower bulb company from Creil used to have an automatic bulb shower for lily and tulip bulbs, with room for 9 trays. That shower could only wash one at a time. Washing a set of 9 trays used to take 2.5 hours.

‘We were looking for more capacity within the same time pressure’, Koos Oijevaar reflects. ‘This shower can process two trays full of bulbs simultaneously and fully automatically. In total, we can place 8 trays in the machine. It includes a night timer; when you get started in the morning, the first 8 trays have already been showered. You can walk away and let the shower do its work. Washing this set now takes about an hour. So we get the work done much faster and the capacity is better.’

Healthy bulbs
A bulb shower is very important for a flower bulb company. Showering is one of the first steps in the production schedule. Oijevaar: ‘We want to plant healthy bulbs and keep them healthy. We often decide in the morning, or at the end of the evening the day before, what we will or will not do that day. It all depends on the weather forecast. But we do need to have the capacity to make a decision. Thanks to this shower, we do.’

When it comes to a shower with double shower capacity, designed by AgrinServ, there aren’t many in the Netherlands. What’s more, the design is unique. You’re looking for something that works optimally. We have had good experiences with AgrinServ. The competition supplied the shower in a different way, and this was the best option for us. The shower is largely made of stainless steel. We are set for the next 20 years.’

To Oijevaar, the most important thing is that there are no malfunctions. If there are, service is nearby. ‘And that also played a part for us. We came up with this product together. We have a certain amount of space here and the shower had to be adapted to it.’ It was important that the forklift truck is be able to drive past it. Also very important: ‘Little residual liquid, enough shower and pumping capacity, a double pump (one per tray) and good cleaning.’