‘A partner with whom we can move into the future’

Spruit Witlofkwekerij from Nibbixwoud has been a loyal partner of AgrinServ for years. The first contact came about thanks to Roel Spruit and Rudy van der Veeken. ‘Father heard some good things about AgrinServ during a visit to the Noordoostpolder and we were looking for a partner to work with. That’s what got the ball rolling’, says son Thijs Spruit.

In the barn in Nibbixwoud, a chicory processing line is running non-stop. The space is small, the number of people involved in the process is large. Therefore, the efficiency must be high. It was AgrinServ’s task to listen carefully to the client’s wishes and to deal with the limited space available. In the chicory industry, no machine is standard, clients always have specific wishes.

‘That’s how it’s done’
Like any other client of AgrinServ, Spruit Witlofkwekerij had certain requirements for the construction of the processing line. Those requirements go into great detail. Think of rollers without bearings, because those can start squeaking. ‘And you can’t lubricate those once your production is running’, Thijs Spruit smiles. ‘AgrinServ delivered a machine without these rollers. That’s how it’s done. We ask, they deliver.’

Spruit’s processing line had to be automated as much as possible. A small space, which we currently have, requires adjustments. We came to a solution together. I have seen things from AgrinServ that make you think; how do you even come up with that, how do you make that? But it runs and works. We have a reliable partner with whom we can move into the future.’

A malfunction is killing for Spruit. ‘You want to be back up and running within a minute, because time is money’, says Spruit. ‘AgrinServ can’t just come over here. That’s why we need machines that are built malfunction-free or that allow for easy replacement of parts. For instance, an electric motor can start grinding or squeaking. If I have one or two spares, I can replace them myself.’

Humidification shower
The humidification shower for chicory taproots is a nice outcome of a practical situation. The idea arose at Spruit, after which AgrinServ went to its trusty drawing board: because the forklift truck with the trays drove past a fixed point each time, they might as well be humidified there. Spruit: ‘They got to work on it. They already had a shower one month later, which greatly increased our efficiency. That says a lot.’ 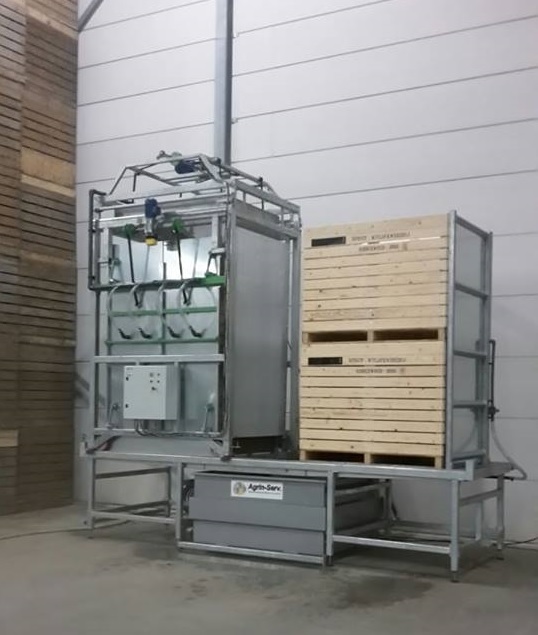